The History of Relations Between Turkey and the European Union 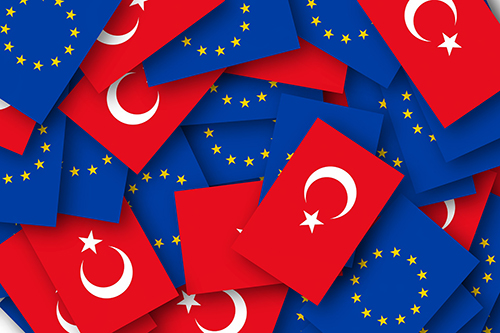 Ankara Agreement which entered into force on 1 December 1964, constitutes the legal basis of the association between Turkey and the European Union (EU). Accordingly, the article two of Ankara Agreement states that: ‘‘The aim of this Agreement is to promote the continuous and balanced strengthening of trade and economic relations between the Parties, while taking full account of the need to ensure an accelerated development of the Turkish economy and to improve the level of employment and living conditions of the Turkish people.’’  Furthermore, the 28 of Ankara Agreement rules out that “As soon as the operation of this Agreement has advanced far enough to justify envisaging full acceptance by Turkey of the obligations arising out of the Treaty establishing the Community, the Contracting Parties shall examine the possibility of the accession of Turkey to the Community.’’ This article clearly indicates that “ultimate goal of Turkey-EEC association relation is Turkey’s full membership to the Community.’’

Ankara Agreement sets out three phases for Turkey’s integration to the EEC. These three phases are respectively preparation, transition and final periods.  The preparation period that aims at reducing economic differences between parties started off on 1 December 1964.  The Additional Protocol which was signed on 13 November 1970 and entered into force in 1973, ended the preparation period and arranged the conditions for the transition period. The transition period was set to enable free movement of industrial and agricultural products as well as persons along with the establishment of the Customs Union between the two parties.

Despite these technical works, the political and economic problems made the relations between the two parties unstable from the beginnings of 1970’s to the second half of 1980’s and the relations were formally suspended after the military coup of 12 September 1980.

The reestablishment of civil authority in 1983 which was swiftly followed by the abandonment of import-substitution policies in 1984 enabled Turkey to open its economy to the operation of international market forces. In parallel with all these changes, Turkey decided to revitalize its relations with EEC and made its application to full membership on 14 April 1987 without waiting the completion of phases for Turkey’s integration to the EEC that had been indicated in Ankara Agreement. In its decision issued on 18 December 1989, the EEC ruled out that it was unable to accept any new members before completing its internal integration. Having underlined that Turkey was eligible to join the Community, the EEC stated that Turkey should develop further in economic, social and political terms and suggested that “it is appropriate to continue the relations within the framework of the Association Agreement.”

As a result of this suggestion which was evaluated positively by Turkey, preparations with the objective to complete Customs Union in 1995 as foreseen in the Additional Protocol were launched. Following two years of negotiation, the Turkey-EC Association Council Decision of 6 March 1995 ruled out the establishment of the Customs Union and the decision entered into force on 1 January 1996. This signifies the transition into the final period of Turkey’s integration to the EEC.

At the Helsinki European Council that was held on 10-11 December 1999, European Council officially recognized Turkey as a candidate state without any precondition on an equal footing with the other candidate states based on the recommendations indicated in the EU Commission’s second Report on Turkey.  In line with the Helsinki European Council’s conclusion, the EU Commission prepared an Accession Partnership for Turkey that was accepted on 8 March 2001. Following the approval of Accession Partnership by the Council and the adoption of the Framework Regulation, Turkish government announced our National Programme for the Adoption of the EU acquis on 19 March 2001. The National Programme that included the short- and medium-term priorities as spelled out in the Accession Partnership was submitted to the EU Commission on 26 March 2001. It was in September 2001 during the Copenhagen Summit that the European Council decided to increase significantly EU financial support to Turkey through "pre-accession instrument" (IPA).

The EU revised Accession Partnership document respectively in 2003, 2005, 2006 and 2008 while Turkey updated National Programme in 2003, 2005 and 2008. In addition to all these works, Turkey started a reform process to extend the scope of fundamental rights and freedoms, reinforce the existing regulations on democracy, rule of law, freedom of thought and expression and human rights. Accordingly, Turkish Grand National Assembly approved 8 harmonization packages and accepted 2 constitutional amendments between 2001-2004.

It was on 17 December 2004 that the EU Council ruled out that Turkey sufficiently fulfilled the political criteria and took the decision to start accession negotiations with Turkey on 3 October 2005. After the negotiations were launched on 3 October 2005, the Negotiation Framework Document was announced. Accordingly, in October 2005 “Screening Process” which is the analytical examination of compliance with acquis began under 35 titles.

13 negotiation chapters were opened to negotiations between 2006 and 2013. However, due to the political blockages of some EU member states and Cyprus issue, 16 chapters are opened whereas one chapter is temporarily closed in Turkey’s EU accession negotiations until today.

Positive Agenda was started on 17 May 2012 between Turkey and the. Positive Agenda is a working method, which aims enhancing Turkey-EU cooperation in areas of joint interest and fulfilling the technical opening and closing benchmarks of negotiation chapters, including politically blocked ones, with the established working groups. Positive Agenda ended when Johannes Hahn took the office of Commissioner for Enlargement and European Neighbourhood Policy from Štefan Füle.

Turkey and the European Commission launched Positive Agenda on 17 May 2012 in order to enhance Turkey-EU cooperation in areas of joint interest and fulfilling the technical opening and closing benchmarks of negotiation chapters, including politically blocked ones, with the established working groups.  The Positive Agenda expired when Johannes Hahn took the office of Commissioner for Enlargement and European Neighbourhood Policy from Štefan Füle.

During Turkey-EU Summits that were held on 29 November 2015, 7 March 2016 and 18 March 2016, both parties took decisions to reanimate Turkey’s EU accession procession, reinforce the very high-level dialogue on topics such as political issues, economic developments and energy between Turkey and the EU, accelerate the EU-Turkey visa liberalisation dialogue, collaborate the management of migration flows, cooperate on the fight against the terrorism, update the Customs Union.

During the Varna Summit that was held on 26 March 2018, leaders of Turkey and the EU confirmed the importance of Turkey-EU togetherness and underlined the candidate status of Turkey at the highest level. During the Summit, Turkey set forth its expectations about full membership perspective, fight against terrorism, Visa Liberalization Dialogue, voluntary humanitarian scheme, Facility for Refugees, upgrading of Customs Union and Cyprus issue.

The Reform Action Group (RAG) Meetings were held on 29 August 2018, 11 December 2018 and 9 May 2019 with the participation of Minister of Foreign Affairs, Minister of Justice, Minister of Treasury and Finance and Minister of Interior. In addition to determination to accelerate the political reform process, the Judicial Reform Strategy, which was drafted in line with RAG decisions, was announced to public on 30 May 2019. Accordingly, work on to update Action Plan on Human Rights, which is also an unofficial benchmark of Chapter 23-on Judiciary and Fundamental Rights was launched. In line with the REG decisions, the work on Visa Liberalisation Dialogue and upgrading of Customs Union continues.

The cooperation between Turkey on refugee crisis and the EU also continue within the frame of Facility for Refugees in Turkey (FRIT). The EU committed to contribute 3+3 billion euros to support Syrian refugees in Turkey.

We consider that in a period during which risks and uncertainties unceasingly increase in the international arena, Turkey’s EU membership is important and necessary more than ever and wish that the current partnership between Turkey and the EU grows stronger and new areas of cooperation and dialogue mechanisms are developed.